Update: JW7 is now available. Check it out here.

This week we’re releasing another quarterly update to our online resource, The State of HTML5 Video Report. Since our last report in October, we’ve seen the release of Windows 8, the iPad Mini, Android 4.2, as well as a surge of mobile usage during the holiday season.

For Q4 2012, we tested Internet Explorer 10 in both Desktop and “Metro” mode. We’ve also added detailed tests for text track support. We hope you enjoy the updated version of this report, and join our discussion! We’ll be responding to comments on this blogpost and on our facebook page.

The desktop browser continues to cede market share as mobile devices continue to gain in popularity. Over the course of 2012, we saw mobile browsers rise to 15% of browser market share, a trend we expect to accelerate in the future. In May of 2012, we also saw Chrome overtake IE as the world’s most popular browser, now used by of 32% of the market. IE (at large) and FireFox remain mostly stable, however we are beginning to see a downward trend in the usage share of these browsers.

The chart below shows the changes in market share over the past year:

As 2012 drew to a close, Android Jelly Bean reached 10% in distribution. Christmas Day also saw more iOS and Android devices activated than on any other day in history. Flurry reports that over 17.4 million new iOS and Android devices were activated on Christmas with the biggest winners being the iPad, iPad Mini and Amazon Kindle Fire HD 7”. We’ll be keeping an eye on the Kindle, so be sure to check back later for another update.

This past October, Internet Explorer 10 was released alongside Windows 8. The newest version of IE comes in two different editions: a traditional desktop application and a “Metro” touch-enabled application. In testing IE10, we found that the browser has expanded support for HTML5, including text tracks, however it still lacks adaptive streaming and video full-screen support. IE10 has a relatively small market share at the moment (0.65%), 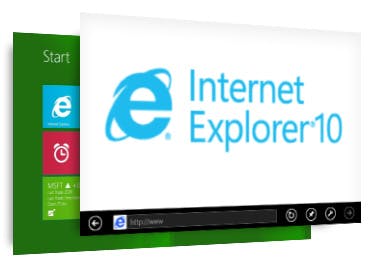 but will likely rise once it is released for Windows 7.

One notable difference between the Metro edition of IE10 and its desktop counterpart is the lack of plug-in support in Metro. While IE10 does support Adobe Flash, Microsoft is maintaining a Compatibility View whitelist to control what sites are allowed to play Flash content while in Metro mode. The rationale behind this is to ensure that content is responsive to the touch interface.

Something else to keep in mind: When using IE10 on Windows RT (Microsoft’s ARM version of Windows), only sites on the whitelist will be able to play Flash content in both browser editions (see our compatibility chart below). There are a few new devices in the wild running Windows RT, the most prominent being the Microsoft Surface, so for the moment, flash compatibility shouldn’t be a major issue. We think the whole “compatibility” list is a bit silly. In practice, publishers should use HTML5 for IE10 unless they’d like to go through the process of being whitelisted.

Where can flash be played?

IE10 is a major improvement to IE9, and we’re excited that Microsoft is pushing forward with their browser implementation of HTML5. While support for text tracks has been vastly improved, work still needs to be done on supporting full screen video and adaptive streaming. As the browser matures, we will retest its functionality to see if there have been improvements to these implementations.

As more browsers begin to support Web Video Text Tracks, we have created new tests to check the functionality of each browser’s implementation. We’ve expanded our HTML5 Report to test if theelement supports:

The results from these tests show that half of the major browsers have implemented theelement. IE10 is the latest browser to support this new tag, however it requires the correct MIME types to be set in order to render them correctly. There is a ticket to implement text tracks in FireFox, but there is no indication of when the final implementation will be released.

Overall, we’re in the early stages of text tracks. It will be exciting to see how this feature evolves to make online video a more inclusive platform, especially given the fact that iOS and Android don’t currently support “polyfill” captions.