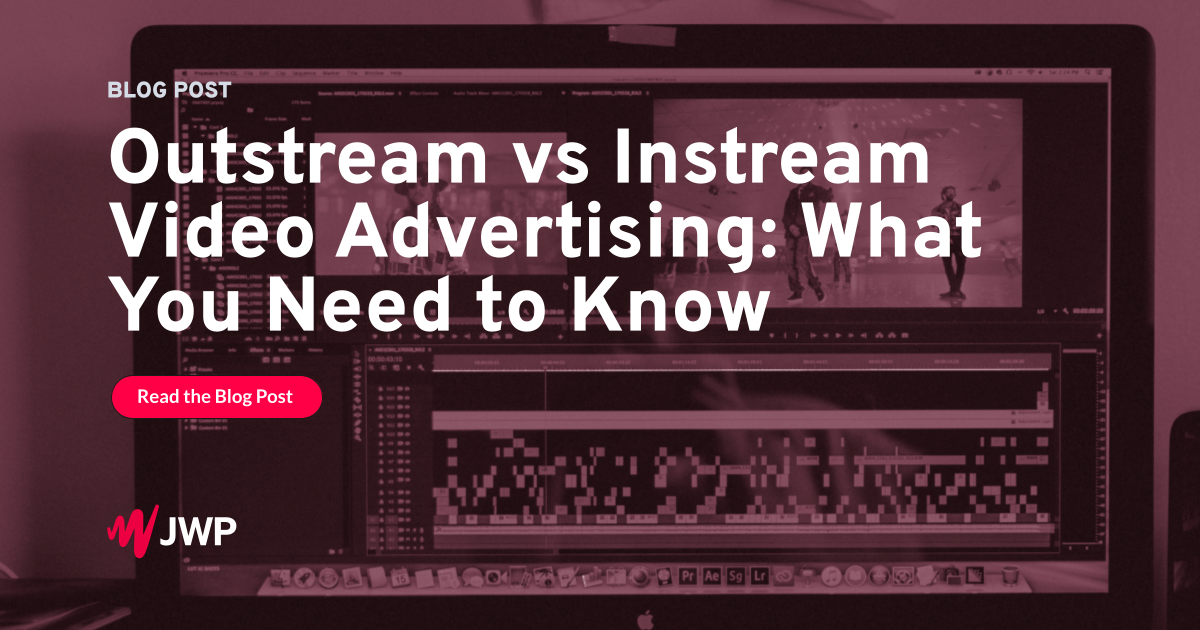 Outstream vs Instream Video Advertising: What You Need to Know

Video ad placement is a key element of ensuring that your advertising strategy gets the desired results.

You want to make sure that your advertisements get eyeballs on them and are not dodged, avoided, or skipped.

There are two different common video ad placements that you can consider depending on the nature of your ad, your industry, and your target audience.

What is Outstream Video Advertising?

Outstream ads are sometimes called “in page” ads. When you load a page and there is a video ad at the top or in the sidebar, this is an outstream ad. This also includes in-article videos, that appear in the middle, in-banner video in the banner ads at the top, and display ads with video elements. Video ads on social media platforms are also outstream video advertising, such as the ones that show up between posts on Facebook.

These ads typically autoplay when the page is loaded and often remain in a thumbnail when the user scrolls. Both the video ad and the player load at the same time. The user typically has the ability to stop the ad from playing and close it.

Outstream ads on mobile also include ads that play as interstitials during video games and other apps. These are the interstitial ads that play between sessions on casual games as well as ads that play when the game is loading. Although they may appear to be part of a stream, they are still separate from the game or app.

Outstream ads often show up in non-video environments where they can stand out more, although this is not always a good thing. Most ad networks offer some kind of outstream advertising.

What is Instream Video Advertising?

Much like older TV ads, instream video ads play when the user intentionally starts a different video. This it the primary advertising model on YouTube and is also used on ad supported streaming services.

Because of this, pre-roll ads are often the most effective, especially if relevant to the requested content.

However, you may find other ad placement works well for your industry and content.

A major advantage of outstream advertising is that you can place ad units on your own web page which you control. This can be used to, for example, enhance a blog with video content. Rather than paying specifically for video placement, you can use your existing tactics.

You can also potentially increase your own ad revenue by selling space to others who might complement your business, rather than compete with it.

Outstream video ads can be of any length and can be placed on a variety of sites. Video can also be embedded into typical banner ads, which guarantees placement above the fold. Finally, they are generally cheaper than instream ads, and instream ads are generally cost per view, not cost per click, due to the smaller number of people who click on these ads. Pricing is thus often more cost-effective on outstream ads.

Some forms of outstream advertising work only on mobile devices. This can reduce reach, especially in older demographics who are less likely to use smartphones.

Outstream advertising is relatively easily blocked by ad blockers, and more and more people are using them. This is aggravated by the sad prevalence of “malvertising,” that is to say adverts that ruin the user experience or, in the worst case scenarios, transmit actual malware onto user devices. This can also reduce your reach.

Also, the need to load both the ad and the player can slow things down. Particularly on mobile, this can result in a higher bounce rate, which can eventually push your Google ranking down. If you have outstream ads on your own web page then it is vital to ensure that you use all available tools to optimize load speed.

With advertisements embedded in apps the risk of false clicks is higher, that is of people clicking on your ad when they did not intend to and immediately backing up. You may, thus, be charged for clicks made by people who have no intention of purchasing.

One advantage of instream advertising is that it is much less likely to be skipped by consumers. This is particularly the case for shorter ads, where people will wait them out.

Instream advertising can also be targeted fairly easily. In many ways, it works a lot like traditional TV advertising, where companies pair ads with shows based on user demographics and content. This means that in this ad format, your ad is being shown preferentially to people who are most likely to watch it.

Instream ads also don’t slow down your website (or the site you are advertising on), and thus don’t impact bounce rate. They are device-independent and can show up on desktops, laptops, mobile devices, etc.

With instream advertising, advertisers often have little control over which videos their content will be placed with. In general, you are buying ad spots from a streaming company or video provider such as YouTube.

This means that your ad might be placed with content that is irrelevant or, worse, does not fit your values as a company. Conflict often develops when advertisers push for content that aligns with their values. Consumers are also less than thrilled when they are “fed” an ad which does not match their values. This can also be true on social media, but less so as people can readily block irrelevant ads.

Platforms often have formatting requirements, and these can be different, forcing you to make multiple versions of the same ad to post in different places.

Finally, people who are waiting to watch a video are much less likely to click on your ad, which reduces direct conversions. (The same, however, is also true of outstream ads placed within mobile apps).

What Parts Of Your Strategy Benefit From Outstream and Instream Advertising?

Ultimately, you should consider both kinds of digital advertising for your company’s portfolio.

Outstream advertising is good to potentially drive conversions, although less so when buying ad spots inside an app. Outstream video can also be used to enhance your own website with additional content that helps it look authoritative and improve Google ranking.

As people rarely click on instream ads, they are best as part of a brand awareness campaign. While people might not click, they may well start to build associations between your brand and the content they are consuming. Be aware that those associations are often outside your control.

Your video campaigns should use both outstream and instream advertising to get the best effect. It’s advisable to keep instream ads very short (30 seconds or less) so they are less likely to be skipped. Outstream ads can often be longer, but require care to keep them from being blocked.

Understanding the difference between outstream and instream advertising can help you come up with a good digital advertising strategy and use both to their full effect. Outstream tends to drive more conversions, while instream is excellent for ongoing brand awareness.