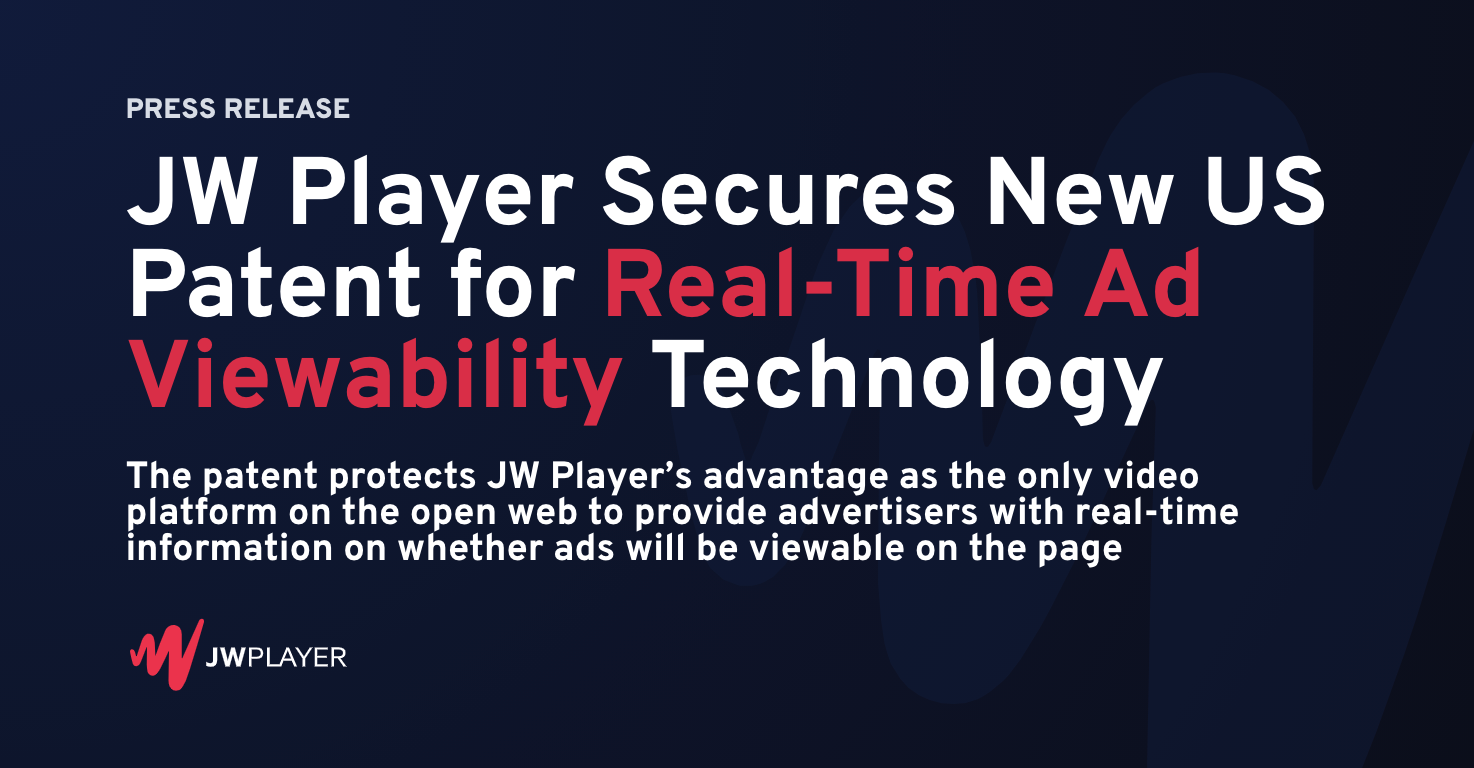 NEW YORK, Oct. 07, 2021 — JW Player, the leading video software and data insights platform, today announced the company has been awarded patent number US11,102,546 by the United States Patent and Trademark Office (USPTO) for its real-time viewability technology. The technology provides advertisers with an unprecedented degree of certainty on whether an ad will be viewable before they place a bid, optimizing ad spend and opening valuable new inventory that would otherwise be excluded from campaigns due to historically low viewability.

“Real-time viewability is like knowing if a pitch will be a ball or a strike before it’s even thrown,” said Michael Schwalb, GM of Data and Partnerships at JW Player. “As the video player on the page, JW Player has access to granular information that nobody else has. Our technology gives advertisers the confidence their ad dollars won’t be wasted on non-viewable ads, and enables publishers to monetize a wider share of their content. We’re proud to be a leader in providing publishers with the tools to thrive in today’s digital video economy.”

Advertisers traditionally base their ad bids on pre-bid viewability data, which indicates the historical probability that ads are viewable on a publisher’s property. Typically, advertisers buy ads that are historically viewable above a certain threshold percentage. However, this means ad placements that are currently viewable on a viewer’s page may be excluded from campaigns if the property has historically low viewability rates. As a result, advertisers miss the opportunity to advertise on content that is highly relevant to their offering, and publishers are unable to monetize the high-quality content they produce.

“This patent makes JW Player the only video platform outside of walled gardens that provides real-time viewability metrics,” said Nir Yungster, VP of Engineering at JW Player and the lead author of the patent. “Our AI learns from millions of videos playing across the web to make real-time predictions about whether an ad will be viewable when the bid request goes out. When you combine these real-time viewability metrics with JW Player’s best-in-class contextual targeting capabilities, advertisers can now confidently place ads on content that is both viewable and highly relevant to their brand at scale. In short, this technology makes campaigns that were historically impossible, possible.”

Although the patent was granted in August 2021, JW Player’s real-time viewability technology has been available for advertisers and publishers to leverage since 2020. The technology complements JW Player’s contextual targeting capabilities. Over the last year, JW Player has partnered with GumGum, Comscore, Oracle Data Cloud, and PulsePoint to provide advertisers with an extremely granular view of the videos that will be the most relevant and safe for their brand to advertise on across over 12,000 unique publishing sites, representing over 10 billion monthly impressions and the top source of video views on the open web.

About JW Player
JW Player is the leading video software and data insights platform that gives customers independence and control in today’s Digital Video Economy. Started in 2008 as a hugely popular open source video player, JW Player ’s technology platform now powers digital video for hundreds of thousands of businesses, including half of the Comscore top 50 sites in the US, leading broadcasters across EMEA, APAC and Latin America. Each month 1 billion viewers, or one third of all people on the Internet, consume video on JW Player’s technology across 2.7 billion devices, creating an unmatched and powerful consumption and contextual data graph that helps customers grow audiences and generate incremental video from digital video. The company is headquartered in New York, with offices in London and Eindhoven, visit https://www.jwplayer.com/.